Canada can have 100 pipelines

The Canadian Taxpayers Federation has found that

Prime Minister has lied and worked so hard to

The World is laughing at us

The World Thinks what

Trudeau is a laughingstock amongst World Leaders.

Twice now Canada has voted in a Trudeau

Every time Canada votes in a Trudeau

Everyone in Canada Cries

Your Children, Children will be

Crying because they will have to pay for this

Trudeau government is pushing an agenda that is designed to hurt our nation.

The World is laughing at us


The Pembina Institute is an anti-oil institute

That is doing the dirty work of the

Federal Government at arm's length and the taxpayers are duped into paying for their dirty work.

Alberta oil from reaching tidewater and

Liberals do is apologize after hiding $183K in contracts awarded to the environmental group.

When the Trans Mountain Pipeline is finish it will be


Oil to the Three


U.S. refineries with no value added in Canada.

Whatever economic and environmental benefits

The Trans Mountain pipeline it had nothing to do with

It has everything to do with enriching U.S.-based refineries

Because Obama administration halted construction on

The remainder of the Keystone XL pipeline

Terminals on the Gulf Coast.

The existing 300,000 barrel per day pipeline

Are clearly being sold off for ever-decreasing benefit

This is why our

Just teetering on the boundary

The Cost of Government Debt in Canada,

To understand how ridiculous the present situation is,

This “subsidy” to the private lenders must end.

Still Canada subsidized the fossil fuel industry to the tune of almost $60 billion per year—
approximately $1,650 per Canadian.

After 100 years of Alberta oil

That it did in royalties from oil companies

Canada has one of the World’s lowest oil royalty rate structures.”

The royalties could amount to merely 1 per Cent

If this does not change Canada will be the next Venezuela 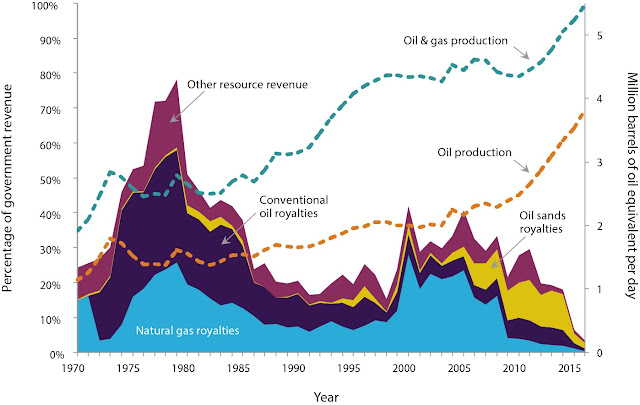 ‘Essentially giving oil away for free’

Oil company payments to governments in Canada and abroad

Canada Buys back the oil at Full USA. Market Price

Canada is spending billions each year on importing oil

It's the scheme of the century. 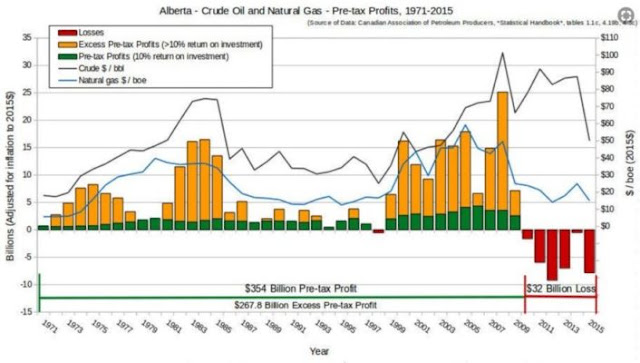 Canada oligopolistic wholesale market has the characteristics of a natural monopoly

It's the lack of Competition and Gouging to

Oil will always go where the profits are the

Highest for Canadian Producers so

This is what's killing Canada 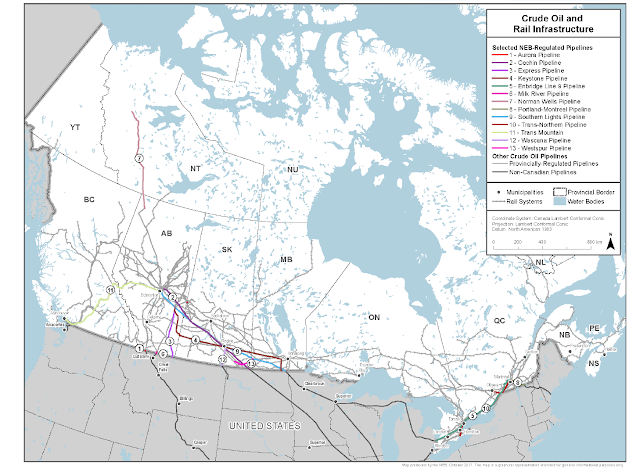 More Pipelines will only make the problem worst

Oil will always go South this is why


Together they now control almost

80 per cent of bitumen production

Control approximately 90 per cent of the

Therefore, the wholesale gasoline and diesel market is an oligopoly.”

These companies control all 15 primary storage terminals in the province “and, along with

The companies’ dominance makes it effectively impossible for competitors to enter the market,
the report found.

“This oligopolistic wholesale market has the characteristics of a natural monopoly,” it said.

Contrary to claims made by Alberta politicians,

The commission found the volume of refined products moving on

The Trans Mountain pipeline had no effect on prices just profits

And it noted the higher relative prices continued even

As demand declined after peaking in 2016.

We already have a pipeline

Canadian producers already have the ability to

Ship their heavy oil to

The Obama administration announced it was halting construction on the remainder of the Keystone XL pipeline,

It estimates the company will make a 637-per-cent gain on the $4.5-billion sale.

Millions in stock options and bonuses

Canada is not shipping Oil to Asia.

25 per cent of Chinese imports are now hamstrung


for two-thirds of its oil imports not Canada


While Iran and Venezuela combined have historically
accounted for another 10 per cent.

Saudi Arabia’s abilities are now in question and supplies from the latter two countries have been interrupted by sanctions
and,
In the case of Venezuela, economic collapse.

“They don’t have the refineries to refine it.

In 2017, the Port of Vancouver only shipped

600 barrels of oil to China

That’s less than a tanker load.

B.C. pipeline to be built in northeast B.C.

Alberta pipeline to be build across B.C. to Vancouver

Who has vowed to use every possible means to

Is trying to protect the province, not be provocative,

Over a proposed ban on an increase of

The Americans have for years Spent Millions trying

To get Alberta oil to flow in One Direction only

Following the big US money behind Canadian pipeline
protests


He made Oil Very Unprofitable to ship to Asia


He made the Americans Very, Very Happy

This is costing Canadians Billions of Dollars per year

The Port of Vancouver can’t even physically fit

The size of tanker required to economically compete

With other shippers of oil to Asia.

The B.C. government proposed limiting any increase in shipments

Of diluted bitumen amid concerns about spills.'

Burrard Inlet is an Aframax class ship at 80 per cent capacity
Carrying 550,000 barrels,

Only about one-quarter the load of a VLCC.

They can carry two million barrels at a time

Plus ULCCs are the largest tankers in the world and

They carry up to 4 million barrels of oil.

Oil is a cutthroat competition among global oil producers,
Refiners, shippers, and speculators,

In which nickels per barrel of oil delivered are fought over fiercely.

Vancouver will never be one of those ports.

No VLCC or ULCCs will ever arrive to offload foreign oil,

Then upload Alberta bitumen for a backhaul trip to foreign refineries.

And increase oil tanker traffic under the

Lions Gate Bridge up to seven-fold,

So is the plan to expand oil sands output by 40 per cent.

No amount of cheerleading, or demonizing,

Or pixie dust will change the raw laws of

Canada now has a 800,000 barrels a day pipe line of crude to terminals on the Gulf Coast

Trans Mountain Pipeline can now sit in the Courts forever 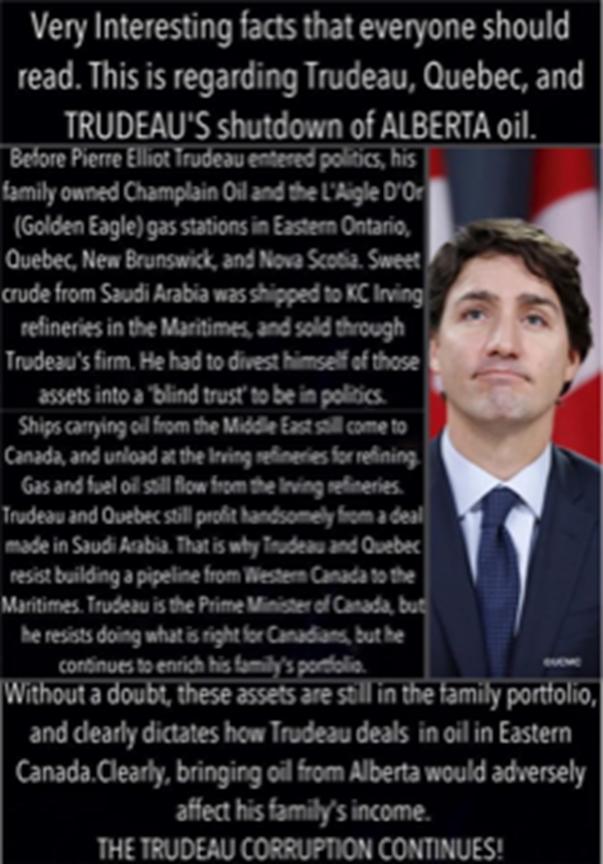 If you ever wondered why the East gets to import oil by tanker but BC is against exporting it in tankers, .

Trudeau is a laughingstock amongst world leaders.


The BC Premier is behaving like a pampered and spoiled brat who does not want anyone else to touch his toys.

There is sound reason why interprovincial works projects are under federal jurisdiction – to prevent the very sort of localized spanner-in-the-works behaviour by one province over the interests of others.

The BC exclusivity is the exact opposite of the inclusiveness Trudeau preaches.
The contradiction is palpable and emphasised by federal government inaction.

Sort of puts things in perspective ……

If you ever wondered why the East gets to import oil by tanker but BC is against exporting it in tankers, read this .

With all the fuss over the Kinder Morgan Trans-Mountain pipeline project, one would think that British Columbia was under siege from petroleum interests.

That is an epic fairy tale.

Our federal government should have the same approach to petroleum pipelines no matter where they are proposed or built.

Similarly, movement of oil by ship should be the same no matter what part of Canada movement is in.

Few people are aware that the East Coast of Canada has about 4,000 inbound trips by oil tankers each year.

Tankers account for about one fifth of the 20,000 inbound vessel trips on the East Coast.

Over 82 million tonnes of various petroleum and fuel products are moved in and out of 23 Atlantic Canada ports.

Almost all the movement of crude oil and petroleum products in Atlantic Canada is through the following ports:

In Quebec, 25 million tonnes of crude oil and various petroleum products are moved in and out of 39 ports where cargo is loaded or unloaded.

Eighty-nine per cent of the shipments of crude oil and various petroleum products are through Quebec City and Montreal.

Over 4.1 million tonnes of oil products are moved from 29 marine facilities in and out of ports in the Great Lakes – St. Lawrence Seaway.

Over 1.8 million tonnes are shipped between Canada and the United States

Over 2.3 million tonnes are imported/exported in and out of the Great Lakes – St. Lawrence Seaway system.

The Canada East pipeline would have disrupted the vested interests who import and refine foreign crude.

It is all a smokescreen to allow investors in the current setup to continue to make money.

The screaming out of British Columbia has nothing to do with ecology.

British Columbians are attempting to punish corporations and provinces that produce petroleum products for no better reason than they feel good about themselves as a result.

Perhaps we should ban fishing, declare a moratorium on west coast vacations and ban passenger liners from west coast ports in retaliation.

British Columbians and their Premier don’t care about $ billions in infrastructure investment and the jobs created, the income to provinces and the federal government or lost tax revenues that can help pay for the services we need.

Please let me know if you can fathom why tanker traffic is barred from the coastline of British Columbia but not Quebec.

The hypocrisy and double standards are blatantly obvious and unacceptable.

The notion that a pipeline company must account for downstream effects of product shipped is ludicrous.

If we ship crude to a terminal on the west coast and it is bought by China or another Pacific Rim nation we cannot be held accountable for carbon emissions of the importing nation.

If this has to be the case, why is BC coal not counted in the same fashion?

That is where ideologues like McKenna and Trudeau are dangerous.

They believe they can impose their utopian standards on other nation while their inane policies are strangling our economy at home.

Even worse, the environmental standards imposed on Canadian projects do not apply to foreign oil imports.

Our government is making it harder for us to become energy self-sufficient.
Why would we import oil rather than produce oil for our own use?

Something stinks and it is not Alberta bitumen.

We need grownups at the federal helm; people who put the well-being of the entire nation and our society first.

Our Prime Minister preaches diversity and inclusiveness while practicing exclusion and divisiveness.

The BC Premier is behaving like a pampered and spoiled brat who does not want anyone else to touch his toys.

The BC exclusivity is the exact opposite of the inclusiveness

The contradiction is palpable and emphasised by federal government inaction.

Twice now we have voted in a Trudeau

Every time we vote in a Trudeau everyone in Canada Cries

Rachel Notley is telling the truth this is killing Canada

Canada will be the next Venezuela


According to a new International Monetary Fund (IMF) report,

Prime Minister Justin Trudeau's vow to phase this out

Canada can have 100 pipelines  Canada's Problem Isn’t Pipelines The Canadian Taxpayers Federation has found that  This is the fir...